The decision I had to make as an Adventist national serviceman 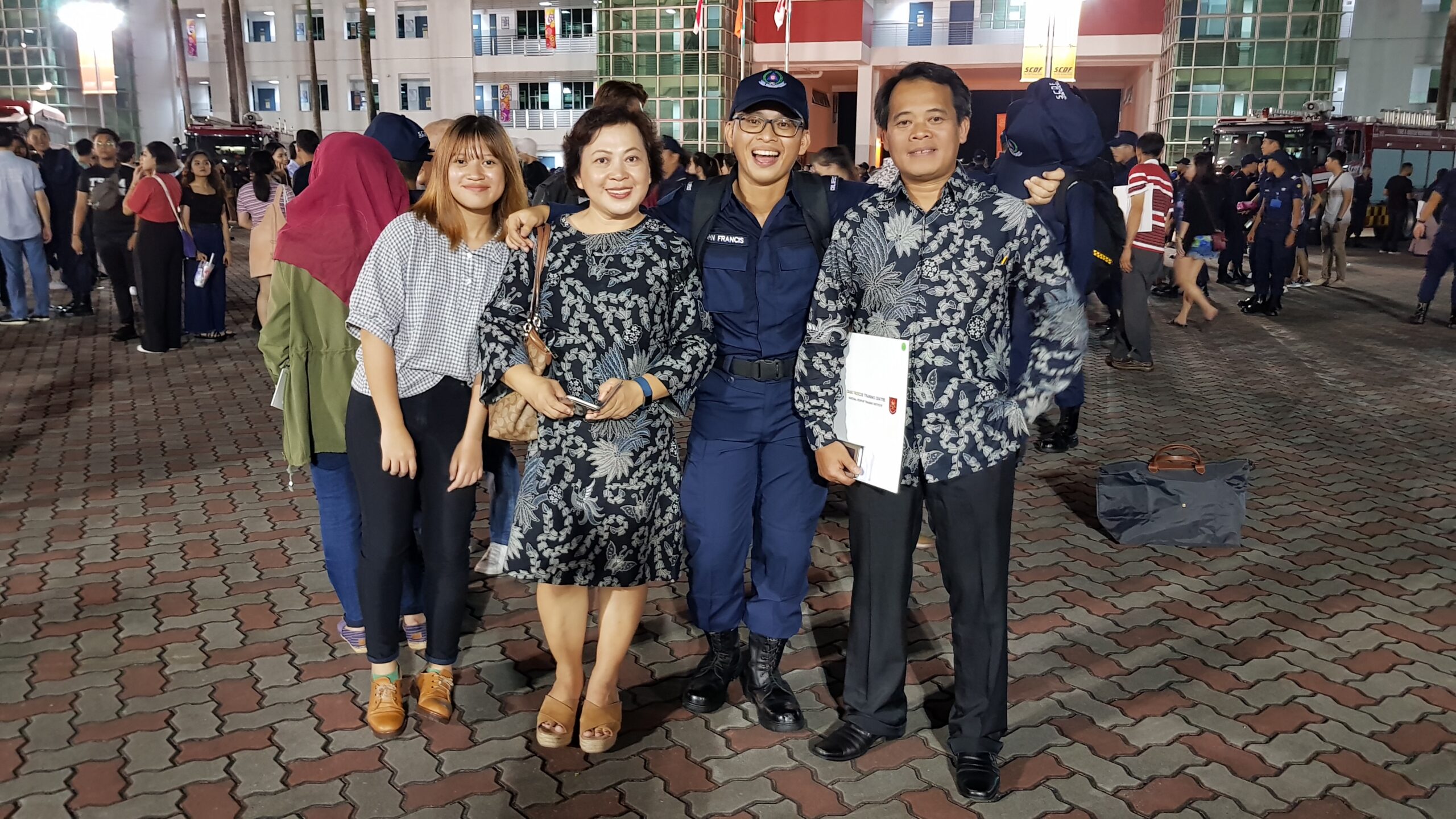 Prior to serving the nation in 2018, I'd like to think that I was an active member of the church. I grew up as a 'second generation' Adventist Christian (that is, my parents were Seventh-day Adventists). It was a privilege to grow up in a family who knew the truth about who God was. I was blessed to have been able to be in youth ministry for almost a good half of my life. At this stage, I would say that my relationship with God was okay. I mean, it was not perfect but I tried my best to keep building my relationship with Him daily.

I received my enlistment letter a month before my graduation, only to find out I was enlisting the day after my graduation ceremony. I wasn't nervous about it up until the night before I enlisted. While I trusted that God would take care of me from the start to the end of my National Service (NS), one item worried me.

I knew my life in NS was going to be different from that of everyone else because of my faith and lifestyle. I entered NS with a letter written by my church. The letter explained that I was a Seventh-day Adventist Christian and that we believed in observing the Sabbath, which was a 24-hour stretch of time from Friday sundown to Saturday sundown each week, which the Lord had specially set aside and sanctified – a day dedicated to God. During this period, the church requested that I should be excused from duties wherever possible. Prior to enlistment, I was very anxious about whether my superiors would be understanding towards my beliefs or would they take disciplinary action against me. I mean, they could confine me for the entire stretch of my entire NS journey. But when I finally enlisted, I realised it was all going to be alright as I had entrusted all to the Lord. In fact, I was so at peace, I ended up submitting the letter from my church late.

When I explained my beliefs and presented the letter to my instructors, they were uncertain as to how to manage the situation. But after bringing up the matter to their superiors, I was given permission to be excused from participating in activities during the Sabbath. Instead, I was given training materials to catch up on after Sabbath.

On the first Sabbath morning while everyone else was out of camp for team-building, I was allowed to stay in a room alone for the rest of the Sabbath. I didn't feel lonely as I was allowed to use my phone for the day. I spent my Sabbath attending Sabbath School via voice call and even got to fellowship with my friends in church, albeit virtually. (Yes, I experienced virtual church way before the Circuit Breaker period.)

While it was definitely a privilege to spend time with God on the Sabbath, I’d like to view this arrangement as more of an accommodation made for me. It was made very clear to them and myself, that I was not to be viewed differently when it came to how rigorous my training was. I couldn’t see it before but looking back this could have gone very differently. The Holy Spirit was definitely working in my life, just in ways I couldn’t see. Apart from my relationship with God, I don’t think my colleagues saw me differently.

In the SCDF, after completing basic training, we would be sent for vocational training either for frontline duty (Firefighter or Emergency Medical Technicians) or as support and administrative staff. During basic training, the conversation in the bunks was all about how almost all of would like to train to be in the frontlines and how that was better than being an administrative staff. It was a bit sad for me.

Historically, those from my church were usually given postings as support and administrative staff. While I wanted to train as a firefighter, I decided to continue to let God be in control of my NS. Towards the end of my basic training, I indicated my preferred vocations but did not hear anything until the end of my basic training. To my surprise, unlike the usual precedent, I was posted to the 12th Basic Firefighting Training.

During my routine interview with my instructors, I explained that I was a Seventh-day Adventist. And guess what? My instructor actually had a course mate during his own six-month training period who was Adventist. During this time, they became friends and because of this, he was understanding towards my beliefs. While it seemed that all my worries went away, it was only the beginning of the things to come.

One day during training, I had the opportunity to share my concerns with the person in charge of training. I again explained that I was a Seventh-day Adventist and asked to be excused from duties on Sabbath wherever possible. During the conversation he explained that I was not going to work every Sabbath. I asked if I was able to avoid duties which might fall on the Sabbath but he had trouble understanding why I couldn’t just work for a few Sabbaths. Although the interaction caused me to be nervous on the outcome, I still decided to stand by my beliefs. To me, the Sabbath is a commandment in the Bible that is just as important as the other commandments. A few days later I came to understand that my instructors were going to post me to train as a section commander instead of the firefighting course, since it was possible to then serve without having to perform duties on the Sabbath.

When basic firefighting training ended, I was posted to the 35th Section Commander Course, just as they said. While I was thankful for the opportunity to train, I was still apprehensive on how this would all work out. I realised that there were even more possibilities that I could not spend my Sabbath with God. During my interview with my instructor, I explained again my circumstances. She then escalated the issue to the head of the Junior Command Training Branch. During the course of the next two months, I got the opportunity to explain my beliefs to him as well. I was definitely nervous upon each interaction. However, a lot of my worries morphed from whether I could be excused from duties on the Sabbath, to how to better explain why Sabbath was sacrosanct.

It was definitely not easy. During each interaction he tried to ask me if I was okay with doing some sort of work on the Sabbath, to which I said that I could but if it could be avoided, I would still like to be excused. At that point I didn’t see the Sabbath as some law I had to abide by, but more of a set time God wanted to meet me at, and while I could do other things on the Sabbath, I realised that nothing else my commander asked me to do could be so important that I had to put God aside. At the end of each discussion I told my commander he could decide on my fate while training here, but I could not compromise by working on the Sabbath if I knew I could finish the work some other time.

I did spend the next few weeks pondering over how I was going to overcome the obstacles that seemed to be get more and more frequent, but I knew that there was no need to worry, as there was nothing I could do. Since I had let God choose how I was going to spend the next 1.5 years, I was pretty sure God would find ways to give me opportunities to spend Sabbath with him.
And He did.

Most Friday evenings it seemed like I would be released from camp later than sundown. Some of the activities were even scheduled on the Sabbath. This led to a weekly apprehension that I would not be home on time to spend the Sabbath with God, sometimes I was even worried that I might not be able to attend church on Saturday morning. But God works in mysterious ways. For each obstacle that was presented before me, I was released early to spend the Sabbath with God. Whenever that could not be possible, they had the entire class excused from staying in camp on the Sabbath. (Despite these concessions, I’d say that somehow our training was still as tough as other courses.)

A long story cut short, I passed out as a Sergeant on the 2 January 2019 and was thereafter posted to Alpha Company. Of course, I still faced situations where I had to deal with the Sabbath, but such things became matters that were within my control. In fact, I had a hand in how training was to be conducted for recruits, which was important as three of my friends in church enlisted later that year. I had the opportunity to share my experiences in my NS journey with them, and even got to make sure they were able to fellowship and spend the Sabbath with God during their confinement week.

Looking back at my two years, I always wondered where God was whenever I faced problems, and even as problems were solved before my eyes, I doubted the presence of God. How could I have not seen it? He was right in front of me. My eyes were just not seeing. He was there at every step of the way, and all I had to do was to choose Him at each turn.

I hope that my story inspires you to continually build on your relationship with God.

By John Francis Sukamto
John Francis Sukamto is currently a student in SMU studying information systems. His hobbies include sports like basketball. He enjoys spending time with his friends whenever he’s not busy. John attends church in Maranatha SDA Church

How do I do good on normal days?

Regardless of the places I went, I have always returned to Singapore with two thoughts …

While waiting for clearance to enter the hospital, Lan turned to me and said: “Do you realize that we may not get to see each other again?”

After years of infertility

“Your baby has water in the brain and a hole in the main arteries of the heart,” my doctor told me.